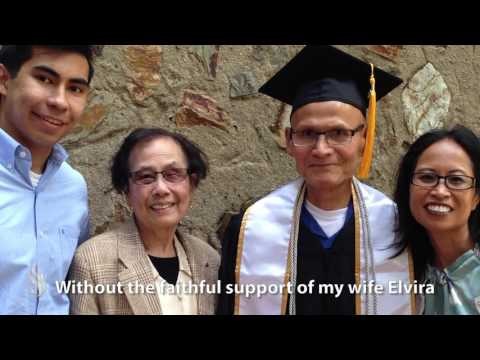 Below is a story published after his earned his first award from UPCEA:

Each year, the West Region of the University Professional and Continuing Education Association singles out one student for its highest honor. This year, the association bestowed the Outstanding Nontraditional Student Award to Sacramento State alumnus, Rodolfo Castillo.

Program coordinator Veunta Dailey, from the College of Continuing Education at Sacramento State, delivered an acceptance speech, via Snapchat, on behalf of Mr. Castillo at the UPCEA West Conference in Albuquerque, New Mexico in September. The West Region includes continuing education colleges and universities in 12 western states and western Canada.

“Mr. Rudy,” as he’s known to his preschoolers and fellow classmates, is the oldest graduate in Sacramento State’s Class of 2016 at the age of 75 and earned his bachelor’s degree in child development through a long-distance degree program.

The association honored Castillo Thursday, Sept. 29, at its annual conference being held in Albuquerque, New Mexico, and though he was unable to attend, he sent a videotaped acceptance speech from his home in San Diego. “It means so much to me that at the age of 75 years old I am the final member of my family to earn a college degree.”

Castillo is a soft-spoken modest man, an immigrant who learned English as a second language, worked as a preschool teacher during the day, went to class at night and survived two heart surgeries to earn his degree.

“He is the American dream.” – Sacramento State President Robert Nelsen

“Rudy is the personification of what it means to fight for your dreams and persevere through challenges,” wrote Sacramento State President Robert Nelsen, in a letter supporting Castillo’s nomination for the award. “He is the American dream and exemplifies everything that is important and good about immigration.”

Nelsen added: “Rudy’s story includes many experiences that alone would make him extraordinary. As a young man, he joined the U.S. Navy which enabled him to rise above the poverty that he experienced growing up in the Philippines. He learned English and served in the U.S. Navy for 28 years. To support his family and his children’s dreams of a college education, he began working as a school custodian. Inspired by the teachers around him, he decided that he would go back to school and earn his bachelor’s degree so that he could teach preschool too.”

Sacramento State Professor Idara Essien-Wood taught Castillo for three years and in her letter of support, she wrote: “He brings a multicultural background and empathy to his work. The wisdom and warmth he carries into his classroom as a 75-year-old father and grandfather is an invaluable experience for his preschool students.”

Castillo is now among the regional award winners under consideration for the national UPCEA Outstanding Student Award, which will be handed out at the 2017 UPCEA conference in Chicago.

For more information on the Bachelor of Arts in Child Development degree completion program, please visit the program web page or call (916) 278-4863.

Back
This item appears in:
Student Success Story September 29, 2016