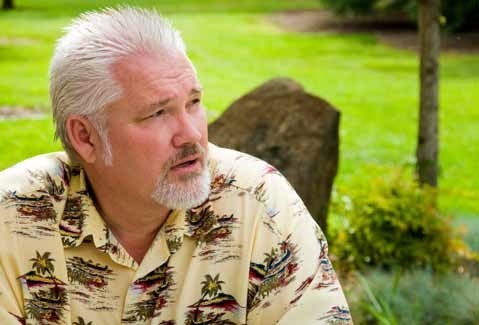 Scott Hamilton spends his day tucked away in a tiny office at a community college doing what he loves most—helping students learn how to learn.

“To me the idea of helping someone get an equal chance at getting an education is the best job there is. I actually get paid to do that. It’s cool!” says Hamilton. “My goal always was to be a college counselor. I didn’t want to be an administrator looking at spreadsheets and going to meetings with people wearing suits anymore. I wanted to see students. But I had to go back and get a master’s degree speciﬁcally focused on disabilities.”

At that time, such a degree did not exist. People working with learning-disabled adults pieced their professional development together with “some experience on the job and then a class here and a class there, most likely at multiple universities,” explains Hamilton. “There was no one college or university that had put it all together.”

When two local learning disabilities specialists approached Hamilton about helping develop the Adult Learning Disabilities (ALD) program at CCE, he leapt at the opportunity. Bringing the chancellor’s office on board to help fund some of the curriculum development, Hamilton also served on the program’s advisory board. When the ALD program kicked off its ﬁrst cohort, he enrolled in CCE as a student.

In 2004, Hamilton earned a master’s in education, with an emphasis in special education, from Sacramento State giving him the ability to share his love of learning with struggling students in California’s community colleges.

The courses also gave him the needed hands-on training in administering and interpreting the assessments learning disabilities specialists use to diagnose disabilities in adults — a skill he practiced on his wife and daughter.

“Both of them got sick to death of it,” Hamilton laughs. “My wife at one point said, ‘I will not take any more tests’ and then I was stuck because I had one more to do. A few other people bailed on me three days before I had to turn it in. She ﬁnally relented but she wasn’t happy about it.”

One of a Kind

The program is still one of a kind. “We get calls from people on the East Coast because there isn’t anything like this available out there and we have students who ﬂy up from Southern California,” explains Jill Matsueda, academic programs director at CCE. “At the community college level, especially, there is a shortage of learning disability specialists. We are constantly asked, ‘Do you know of anyone who could help us out? We need a learning disabilities specialist.’”

In addition to meeting requirements for the master’s degree, the program’s 15 units of academic credit also fulﬁll the California Community Colleges Chancellor’s Office qualiﬁcations for acceptance into its Learning Disabilities Eligibility Model (LDEM) training. Used by all 110 community colleges in California, the LDEM identiﬁes which students are eligible for learning disabilities services.

“This program is vital to the continuation of the LD eligibility model,” says Scott Berenson, disabled students program and services coordinator for the chancellor’s oﬃce. “It helps feed our system and give us good assessors who are knowledgeable about students and the accommodations for their success and about all of the testing that we use. I’m thrilled with it and with the people I’m working with at Sacramento State as well.”

“The participants in this program touch the lives of people who’ve been told they’ll never get past a certain level; they’ll never graduate from high school or college or be able to work in a speciﬁc ﬁeld,” says Matsueda. “Our graduates help these people accomplish all of that and more.”

“I did my time for the greater good,” he claims. “Now I do it for the smaller good, in a way. At the chancellor’s oﬃce I was serving 100,000 people a year but only indirectly. Now I want the reward— to see people graduate and to see them get excited and interested in learning.”

This article originally appeared in the Fall 2009 issue of Access Magazine. It has been edited for length and clarity. Article written by Allison Shaw.