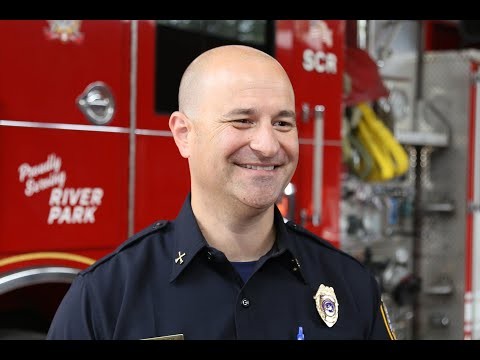 Sacramento State honored newly promoted Battalion Chief Derek Parker with a 2019 Made at Sac State tribute for his leadership in starting the University’s Paramedic Program and for serving as an example, when he returned to college at 32. Read writer Jonathan Morales’ feature, “Derek Parker completes his degree and starts a new program at Sac State,” following a 2-part video series produced by Jessica Jarrety.

First, he was running an adult education paramedic program at the Sacramento school district’s Old Marshall School, a program he had built up from a single EMT class, and the program couldn’t be accredited unless its director had a bachelor’s degree. So Parker, who had left Sonoma State years earlier before graduating, enrolled in Sacramento State’s Bachelor of Science in Career and Technical Studies (BSCTS) program, one of several degree completion programs run through the College of Continuing Education (CCE).

Then funding for the program suddenly dried up.

“I had put all this work into creating this paramedic program that I believed in,” said Parker, who is also the battalion chief for the Sacramento Fire Department’s Emergency Medical Services (EMS) division. “I’ve got students who are in the program. I’ve got a whole slew of students who want to get into the program. I can’t just let this thing go.”

He contacted Jill Matsueda, director of academic programs with CCE, to see what could be done. The college was receptive, the school district signed off on a transfer, and, in 2009, the CSU’s first and still only paramedic program was born.

“We went to Sac State first, and they jumped on it,” Parker said.

Today, the paramedic program has made a tremendous impact on the fire department where Parker works: He estimates around 20 percent of the department’s employees have gone through it.

Parker’s path to a degree, and a job as a battalion chief, has been a little circuitous. After graduating from Merced High School in 1994, he enrolled at Sonoma State and played football there until the university cut the program in 1996. When he left school and prepared to enter the workforce, his grandmother suggested firefighting.

The entry level position in the industry was as a firefighter/paramedic,so Parker went to paramedic school and got a job with a local ambulance company.

“It’s the closest thing I could find to sport competition. When you’re addressing a sick patient, you have a limited amount of time, so there’s a little bit of pressure,” he said. “Can I complete all these tasks in a short period of time for the betterment of the patient? That’s what drives me. Pushing myself. I’m competing against myself.” 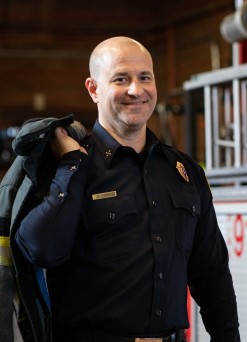 As a battalion chief for the EMS division, Parker is responsible for all of the division’s day-to-day operations. That means overseeing the individuals who work on ambulances, handling EMT and paramedic certification, ensuring that ambulances and other vehicles are in good working condition, and managing the budget. He also still responds to fires, and spends much of his time during the summer on incident management teams working to contain the state’s now-prevalent wildfires.

In addition to the project management skills he uses regularly in his current job, the BSCTS program included students from a wide variety of career backgrounds, something Parker says gave him a broader perspective he continues to find useful. For example, meeting people in the culinary industry provided insight that can come in handy when responding to a grease fire or other emergency at a restaurant. Interacting with students from a law enforcement background allowed him to better understand their perspective on emergency situations.

“You always think your kingdom is the most important kingdom, and I realized that it’s a neighborhood, not a kingdom,” he said. 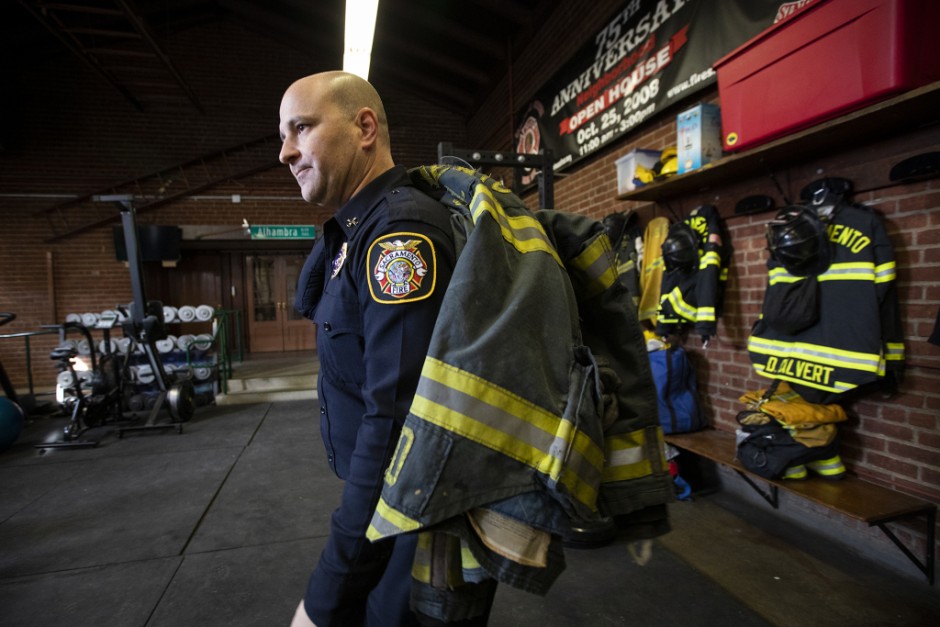 With the paramedic program, Parker has taught close to 500 paramedic students who since have found jobs at fire departments, ambulance companies, hospitals and other employers throughout California and beyond. Students in the program receive hands-on learning experiences in a variety of areas, including advanced training in life support and terrorism preparedness, and leave with 30 units of academic credit.

Students in the paramedic program consistently rank higher than the national average when taking the National Registry Exam, a cognitive test required for paramedic certification.

The University runs two cohorts of paramedic program students each academic year, with 40 students admitted to the fall 2018 cohort and another 40 admitted to the spring 2019 cohort. According to the latest data from CCE, 90 percent of paramedic students became licensed after completing the program, and nearly the same number were employed within six months of graduation.

“Derek saw the untapped potential for Sacramento State to offer a paramedic program,” Matsueda said. “Traditionally, these programs are offered at the community colleges and from private providers, but Derek saw the potential for a level of quality and professionalism that would come with the academic oversight of University faculty.”

The original story was written by Jonathan Morales and the award-winning Made at Sac State campaign.

Back
This item appears in:
Article May 1, 2019 Jonathan Morales, University CommunicationsApril 17, 2019